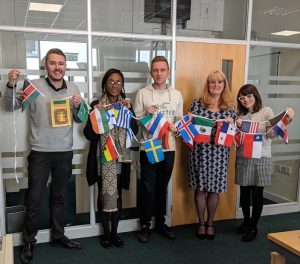 Atlantic Languages is a Plymouth based business providing foreign language translation and interpreting services to a range of public and private clients & businesses (including: manufacturers, charities and service providers, other translation agencies, media houses, and solicitors). Led by founder Debbie Buse, and her small core team, the business has now been trading for over 19 years. Some of their clients are based in France, Belgium, Germany and Switzerland, whilst most are based in the UK, particularly in the South West. Their business mission is to help improve communication overall and remove barriers to new markets when dealing with non-English speaking suppliers or customers along with a wider ambition to be the ‘go-to’ translation services company in the South West.

YOY turnover at Atlantic Languages had been stagnating and the team were also in need of a kickstart and some outside impetus. Recent restructuring internally had also felt like a turning point and there was a real desire for some new ideas. Having been previously aware of the GetSet for Growth service, Debbie decided to sign-up at the end of 2018.

Talking about how GetSet has helped her to address some of these growth challenges, Debbie says: “Very well – it has been brilliant. It has been great to have a sounding board and constructive ideas on how to move forward. It gave focus to the task and helped me avoid excuses / prioritise. The free support also provided an objective pair of eyes and a fresh perspective.”

The support from GetSet has enabled Atlantic Languages to revisit its historical PPC investment to then re-invest this budget into more targeted marketing to key niches based on a clearer customer understanding. New systems for follow-up are now in place to help build a more robust sales pipeline. The support also helped to build team efficiencies via a collaborative review of roles and responsibilities. It has helped them to rebuild confidence and become more proactive as shown by their recent shortlisting for the Plymouth business awards.

When asked if Debbie would recommend the service to other Plymouth based businesses, she says: “I would definitely recommend. You have nothing to lose, especially if you are honest. Face up to realities and be prepared to take on board the suggestions that are made. It can only benefit you and make your business better.”