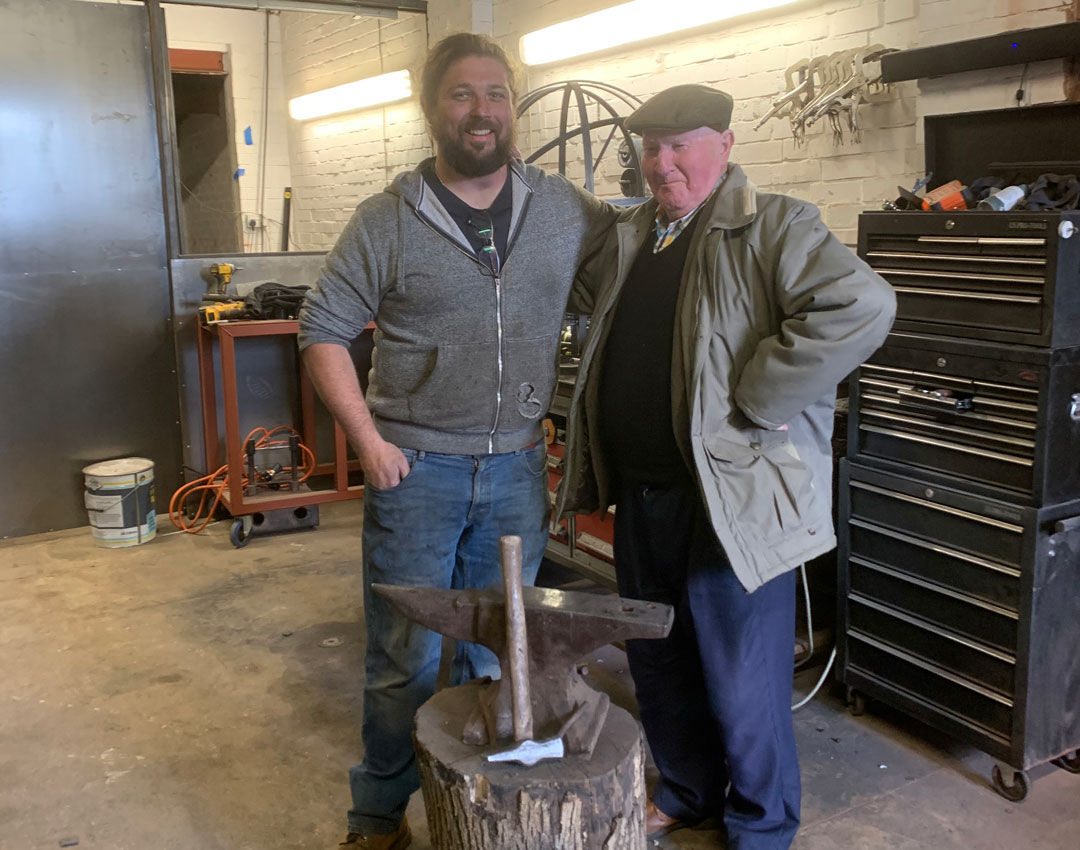 Mark Thomas knew that he wanted to be a blacksmith from an early age and was disappointed to hear the words, “You’ll never stick to it,” from his grandfather when he told him, aged nine. The same grandparent then went on to take back his words when Mark qualified with a triple distinction star from the National School of Blacksmithing in Hereford. His grandfather then stated, “actually I knew that you would do it but just wanted to push you to follow your dream,” as he handed over a family heirloom – his own grandfather’s own anvil which had been his prized possession for many years.

Originally Mark went to Bicton College in Devon to complete an agricultural course to make up the grades he needed to complete the blacksmithing training he really wanted to do. It was here that he met his wife. He then went to the National School of Blacksmithing in Hereford. “My time there was fantastic with students attending from all over the world,” stated Mark. The couple then settled in Mark’s native Devon, setting up his own blacksmith business. However, things didn’t go so well, and he describes it as being, “the wrong time as I lacked the experience and business skills.”

Mark took the decision to work for a local steelworks as Head Fabricator working mainly on domestic, commercial and industrial steel fabrications which he describes as “a really great experience which taught me a lot but didn’t allow for his natural creativity to come out”, other than in a spectacular Dragon piece which he created which still sits on the wall at the site in Exmouth.

Fast forward to the recent national lockdowns and Mark’s passion for working with metal as a business idea became a reality. Having been furloughed, he used the time to firstly spend with his new-born son and growing vegetables in his garden, but also to get his business going. He built himself a workshop in his garden and started to work for himself. He worked part-time for a short period but then realised that it was the right time to focus on his own work. “I’ve never looked back,” he stated, “although the whole lockdown period was unsettling, especially with a new baby, but I have to say that nothing but good came from it!”

Mark initially shared his workshop with another craftsman, who encouraged him to get in touch with the GetSet Adapt programme, funded by Devon County Council.

“Their help has been invaluable. Through my 1:1 sessions with Lee, I have been able to take my business forward in a way that I never could have managed on my own.”

Mark explained that the work he did with Lee gave him clarity, helping him to get his business plan on paper, instead of just being in his head. “It also boosted my confidence as previously I had doubted my ability as a businessman even though I knew I was competent. It was a form of imposter syndrome as my confidence had been knocked over the years.”

He described the sessions as giving him reassurance that he was already doing many of the things that he needed to for his business to grow. He added that, “as a small business owner, I have learnt that you have to accept what you are good at and get help from others with the parts of the business that you are not.”

Mark recognises that his skills lie not just in his creativity and his skill with metal and wood, but also in the experience that he provides for his customers. “I love meeting new customers, getting to know their stories and finding ways to incorporate this into the pieces they commission.” He now has plans for his wife to assist with the book-keeping for the business to help spread the load. “She also keeps me on track, stopping me from getting distracted from new projects so that we keep the cash flow strong.”

“GetSet Adapt has helped me to focus on where he wanted to be in terms of the business and I have been busy, already achieving many of the planned targets for the next two years.”

These included getting his branding right and setting up and managing his social media channels. Mark is also providing training to a friend who wants to work as a blacksmith – “I wanted to help him get into the craft and we are exploring options for qualifications at a local college, as I know how hard it is to make that change in your career.”

Looking forward, Mark aims to buy a plot of land where he can build a house for the family as well as a new workshop to allow him to move towards the family business that he always wanted to develop. He wants to purchase a CNC plasma cutter and learn how to use it so that he can take on jobs from other companies as well as potentially develop a range of products which customers can make themselves from a kit.

When asked what his favourite piece of work so far has been, he answers without a pause – “a two-metre-tall dragon which appears to be bursting out of the wall, which sits in the premises of his previous employer.” His latest commission is a triceratops which will be mounted like a hunting trophy for a couple who sought him out years later after meeting him.

Mark has come a long way from the days of immersing himself in sci-fi and fiction as a child which even now proves the inspiration for his work and we can’t wait to see that dinosaur take shape!